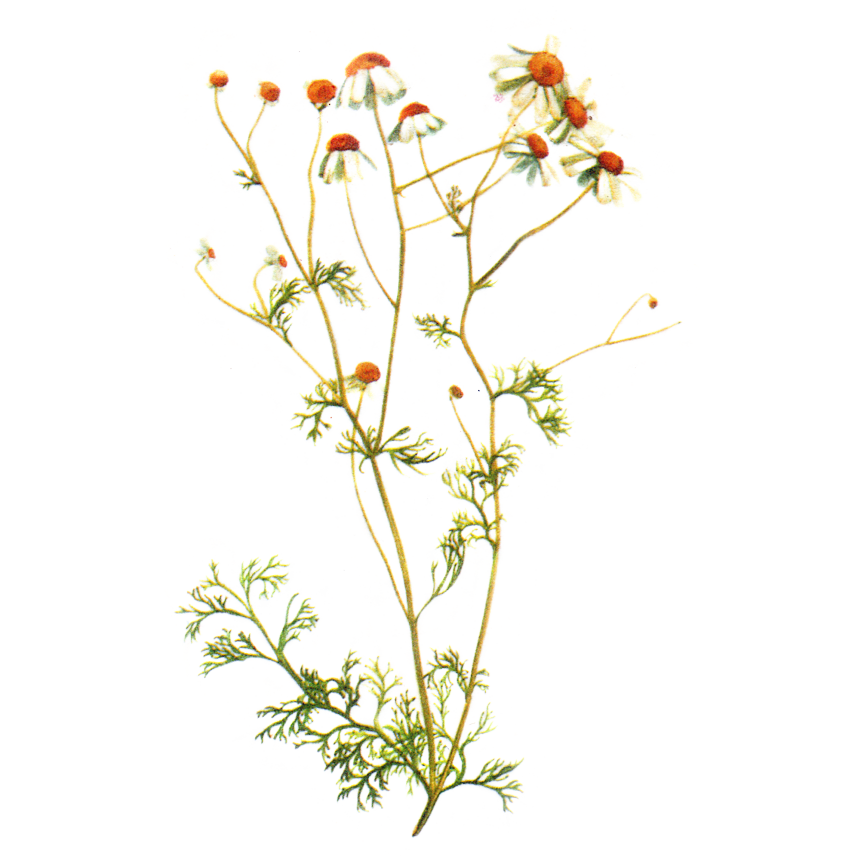 Camomile
Matricaria chamomilla
Scientific Name
COMMON NAMES
German Camomile, Wild Camomile, True Camomile, Scented Mayweed.
It grows on clay soils, arable land, hillsides, in glades, clover-, potato-, corn-, and wheatfields. After snow rich winters and wet springs, it is found in abundance' Because of the increased use of chemical fertilizers and herbicides, our valuable Camomile is more and more eradicated. The hollow receptacle at the base of the blossom distinguishes it from the Roman Camomile. The scent is aromatic and pleasant. A closer description of this well-known plant is undoubtedly unnecessary. Gather the flower heads from May to August, preferably in the bright noon sun. It is no exaggeration if I cite the Camomile as a "cure-all" especially for babies. In any case, the child should be given Camomile tea if it suffers from cramps and stomach aches. The tea is of help in flatulence, diarrhoea, eruptions, stomach troubles and gastritis, in menstrual disorders, cessation of menstrual flow and in all abdominal disorders, insomnia, inflammation of the testicles, fever, wounds and toothache.
Camomile produces perspiration, is soothing and antispasmodic. It is antiseptic and anti-inflammatory especially in cases of inflammation of the mucous membranes. Externally Camomile is used as a compress and a wash for inflamed eyes, conjunctivitis, moist and itching skin eruptions, wounds, and as a gargle for toothache. Anyone who starts feeling aggravated should drink a cup of Camomile tea and soon the wonderfully soothing and sedative effect is felt. Very much recommended is a warm Camomile pillow applied to aching parts.
Camomile baths and washings are most beneficial to the whole nervous system. After severe illnesses or for states of exhaustion, its soothing and quieting effect is soon felt. Even as a beauty aid Camomile has its merit. The face washed with a decoction of Camomile once a week will soon show a healthier and softer glow. A decoction used as a hair conditioner, especially on blond hair, will make it manageable and give it a beautiful shine.
Camomile helps the movement of the bowels without purging and is therefore indirectly beneficial for haemorrhoids to which Camomile ointment can be applied externally. This ointment may also be used to promote the healing of wounds. Colds and maxillary sinusitis are soon better if Camomile steam is inhaled. After such a treatment one must understandably remain warm.
The ancient Egyptians dedicated the Camomile to the Sun-God because of its fever-reducing effect and the oil of Camomile was used as a rub for neuralgia and rheumatic pains - the name Matricaria comes from the latin “mater” = mother - and, as the name implies, was used for female disorders. ln old herbals one reads that the oil of Camomile takes away the tiredness of limbs and the boiled flowers, applied to an ill bladder, ease the pain.
The Swiss Abbé and herbalist Kuenzle tells of a village woman known as "Camomile Witch" to whom people came in their distress; five people regained their hearing, when she fried Green Field Onion (Ornithogalum caudatum) in Camomile oil and this warm oil was dropped into the ear frequently.
This “Camomile Witch” gave movement back to paralyzed limbs through Camomile oil massages. Against eye-pain Camomiie boiled in milk was applied as a compress over the closed eyes which healed in a short time. And the Abbé Kuenzle goes on: "A weaver could only sleep sitting up; he thought he would suffocate. The herb woman took a look at him and said he was not passing water which he acknowledged. lmmediately he had to drink from a large bottle of wine in which Camomile had been boiled, a glassful mornings and evenings. An unbelievable amount of urine was passed; first dark and turgid, then clearer and clearer and after I days he was healed.
DIRECTIONS
INFUSION: A heaped teaspoon to ¼ litre of water, infused for a short time.
BATH ADDITION: For a full bath use 2 double handfuls, for facial and hair wash 1 handful of Camomile  flowers, pour boiling water over them and infuse.
COMPRESS: ¼  litre of boiling milk is poured over a heaped tablespoon of Camomile, infused for a  short time, strained and used warm.
INHALATION: 1 litre of boiling water is poured over a heaped tablespoon of Camomile. The steam is inhaled under a towel.
HERB PILLOW: A linen bag is filled with loosely dried Camomile flowers and stitched up; warmed in a dry pan and used.
CAMOMILE OIL: A small bottle is filled loosely with fresh Camomile flowers picked in the sun and cold-pressed olive-oil is poured in until it covers the flowers. The bottle, well stoppered, is kept in the sun for 14 days. Store in the refrigerator.
CAMOMILE OINTMENT: 250 gm. of lard are heated, one heaped double handful of fresh Camomile flowers are added; as it foams it is stirred, removed from the stove, covered and kept in a cool place overnight. Next day it is warmed and pressed through a piece of linen. The best way to do this is to place a sieve with a piece of linen inside over a jug or pot with a spout, and squeeze out the last bit of lard. The ointment mass is stirred and filled into clean glass jars or pots.
Tags: Camomile